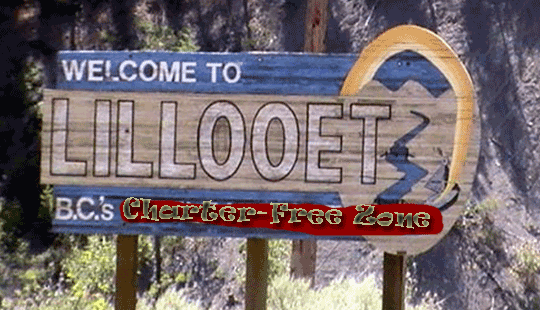 Just down the road from me is the town of Lillooet.  It’s a nice enough place to live except, that is, for the local politicians.  They’re a nightmare; control freaks of the highest order.  Back in 2010 Lillooet Mayor Dennis Bontron wanted to ban what he called “unauthorized meetings” in an effort to curb vandalism. The penalties proposed for holding an “unauthorized meeting” were fines of up to $10,000 and 6 months in prison

As soon as the B.C. Civil Liberties Association stepped in and demanded to speak at the next town council meeting the cowardly Bontron dropped the asinine proposed law like a hot potato.

As I wrote back then,

Bylaw 343 would close parks and beaches overnight,and would also place a ban on “unauthorized performances, marches, meetings and formal gatherings in public places”.

Now, I understand that the fact I live close to this town gives me greater pause for concern than most, but think about this people… how does this proposed bylaw possibly relate to the problem Bontron claims it will solve?

As bad as that proposed law was, there is a far worse cancer (what Grant Loyer calls his critics) eating away at the heart of this little town.  The chief administrative officer of Lillooet, Grant Loyer has the power to sue anyone he wants for any reason and the town will pick up the tab for all legal expenses.

It’s written right into his contract.

But that’s not even the worst part.

Should his Charter-abusing lawsuit against some hapless mere citizen fail the town will pay all damages.

But that’s still not the worst part.

Should his abusive lawsuit actually prevail, he gets to keep half of any money he wins as a result of violating the rights of some hapless mere citizen.

Here is the excerpt from Loyer’s contract:

“If the Employee commences proceedings in the Supreme Court of British Columbia in connection with defamation claims arising during and related to the course of or performance of his or her duties, the District will assist the Employee by reimbursing the Employee for legal fees and court costs incurred prosecuting the defamation claims.”

The contract also stipulates the following:

He fully believes it is his duty to attack anyone who disagrees with his opinions and/or policies because he has been “targeted” by “various people in the community”.

“Through negotiation, the scope was narrowed down so that only my contract contained the legal fees and defamation clause. That was done for a couple of reasons. I think there was more than enough ‘evidence’ out there that I had been targeted – by various people in the community who said some things that were not necessarily provable – and so were some members of my staff. The second point is my staff work for me and it’s my job to defend them and I intend to do that within the scope of the language in the contract.”

Clearly Grant Loyer and Lillooet Mayor Dennis Bontron forget who their bosses are: the mere citizens of Lillooet they seem so eager to sue into silence.  Whether they like it or not, the actions of public figures and public employees are fair game for public debate.

Even if that public discussion makes Grant Loyer and Dennis Bontron look like incompetent bullies.

Freedom of thought, belief, opinion and expression as guaranteed by the Charter of Rights and Freedoms are not welcome in Lillooet.  Hopefully getting their behinds handed to them on a platter in this lawsuit will spark the citizens of Lillooet to employ better specimens of humanity in the next civic election.

Before they waste too much money on a SLAPP lawsuit against its own citizens both Loyer and Bontron really ought to read this decision:

If they do they will learn they don’t have a legal leg to stand on.