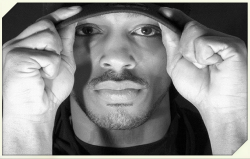 Rapper J Wildd contacted me the other day.  He’s having some trouble with the Edmonton City Police and wanted my input on a video he recorded of his latest interaction with Edmonton’s finest.

Now I’m no fan of Rap, but I am a fan of some of the artists in the field, having met and worked with some of the biggest names in the business.  With a notable exception who will remain unnamed, the rappers I’ve worked with are total professionals.  Rapper Ludacris is certainly the most memorable for me as we had a very interesting conversation one night about work ethic, the film business and Tupac Shakur.

I had already watched a number of documentaries about Tupac and what impressed me about that man was how hard he worked.  Ludacris shared that Tupac was one of his role models because of that work ethic.  It was an interesting conversation with an interesting and intelligent man so it’s no real surprise that I have nothing but respect for Ludacris, even if I’m not a fan of his music. Ludacris is one class act.

Now, as for Jermaine Parris aka J Wildd‘s situation, the video he sent me actually raised a lot more questions than it answered, although J Wildd’s frustration at what he perceives as the endless harassment by Edmonton Police is very clear.

This latest incident does make a person wonder about the priorities of Edmonton Police constables who followed J Wildd for almost 50 blocks before pulling him over and ticketing him for littering.

An unidentified Edmonton Police Services constable said he witnessed Jermaine toss a cigarette butt out the window of his vehicle and that was the reason for stopping him.  Later the video reveals the constable who pulled him over for this heinous crime was late for court, his intended destination before changing his priorities to follow the young black rapper’s vehicle for over 20 minutes before finally stopping him.

For a constable who is already late for court, it seems a strange thing to blow off that commitment to pull a u-turn in the middle of a busy street in order to follow a guy for 50 blocks before pulling him over to ticket him for littering.

Clearly, there is much history to sort through to see what’s really going on here. The rapper is no choir boy, but then name me one rapper who hasn’t lived life a little “fuller” than most?  For that matter name me one human being who claims they are an angel and I’ll show you a liar!

He’s been in prison, but that was a long time ago. When he was a juvenile he ran with a bad crowd and got into some trouble, but as an adult he’s stayed out of trouble. He’s been out of trouble for over 10 years, yet a decade-old notice on CPIC has Edmonton Police dropping everything to arrest the young man for “breaching conditions“?

J Wildd’s frustration is clear on the video and really, wouldn’t you be frustrated too if police repeatedly pulled you over repeatedly and police followed you for months?

In the video and with the exception of the constable who initially pulled over Wildd, the remainder of Edmonton Police members he interacts with do their best to calm him down and let him know what is happening and what they’re trying to do to prevent the mandated arrest for “breaching”.

Respect is a huge issue for the rapper, but then it is for so many people, isn’t it?  He felt particularly disrespected by a young female constable who, in my view, was being incredibly polite and went to great pains to explain how she was attempting to resolve the situation in his favour.

Yes, she was sarcastic at points, but then sometimes so am I when I get attitude, so I understand how that happens.

There is history here too, as this particular female constable filled out the very form the first cop rifled through as he initially harassed Wildd, then claimed repeatedly she didn’t know anything about anything.

I use the word “harassed” intentionally.  This unidentified male constable is obnoxious and rude from the outset, unlike a number of his colleagues later in the video.

Whatever is on that CPIC notice about Jermaine Parris, it was enough for the first constable to request a LOT of backup.  Five Edmonton Police Service cruisers surrounded the rapper and his vehicle and 5 constables are visible in the video.  There were 7 constables on the scene in total, according to Wildd.

Given all these Edmonton Police Service constables never pull their weapons, never search him or his vehicle, and never even ask him to step out of his vehicle, something simply doesn’t add up.

If this situation is serious enough to have 5 police cruisers converge, then isn’t int serious enough to pull the “suspect” out of his vehicle and search both him and it for that most unassailable of mantras: “Officer Safety“?

But they don’t.  There is absolutely no concern about their safety shown anywhere in this video, other than the number of police present.

Jermaine Parris, aka J Wildd, was kind enough to answer my initial list of 14 questions about this case, his history, and my repeated (endless??) follow-up questions with what apparent honesty, openness and candor.  He went out of his way to give me way more information than I asked for in order for me to understand his current situation. I thank him for that.

Here’s some of the backstory the video doesn’t make clear.

When Jermaine was 17 he lived in Trenton, Ontario with his mother and her common-law husband, a military man stationed at CFB Trenton.  Jermaine hung around with “the wrong crowd” as so many people do at that age.

How many of us can honestly say we’re not ashamed of some of our actions in our teenage years?  I suspect not many.  The overwhelming majority of us do precisely what Jermaine has done.  We clean up our acts and live a decent life.

When he was 17, he and some friends broke into a golf course building and got caught.  Jermaine spent the next 5 months in a Toronto youth detention center and was then shipped off to another facility in Hamilton, Ontario, for another 3 months or so.

While in that facility someone lit one or more fires that caused the entire wing of the lockdown of the detention center for hours while the fires burned.  It wasn’t until smoke inhalation incapacitated most of the inmates that guards finally came in, extinguished the fires and aired the place out.

Prison authorities interviewed Jermaine about the fires and told them what he knew, which was nothing.  He had no part in setting the fires, he says, and thought nothing further of it.

When Jermaine finally went to court on the Breaking and Entering charge the judge released him with a sentence of “time served.”  He had spent 8 months in detention.

Now 18, he moved out to Comox, BC, since that’s where his mother and step-father now lived.  His step-father transferred to CFB Comox while Jermaine was incarcerated.

What suddenly sparked all this police interest in him after 11 years is a little puzzling.  A 10-year-old juvenile warrant seems an odd reason to spend so many police resources repeatedly following, stopping and harassing a man who is, as far as I can tell, living his life decently, doing what he can to help others less fortunate than himself and doing his best to build his music career.

Jermaine Parris, aka J Wildd stayed out of trouble since turning 18.  After a year in British Columbia his step-father transferred back to Nova Scotia and Jermaine moved with his parents.

He spent the next 8 years or so there, working, developing his music and, it’s also where he met a young woman.  They spent roughly 8 years together and have a 7-year-old son; clearly the delight of Jermaine’s life.

While Jermaine and the boy’s mother aren’t together any longer, they remain good friends and are in constant contact.

He moved to Edmonton, Alberta in 2012 after obtaining his Class 3 drivers license in Nova Scotia.  His hope was to get work in the oil industry but there are apparently other certifications required that Jermaine didn’t have.  He’s working on getting those certifications but that’s made more difficult by the recent harassment by Edmonton Police and the court dates resulting from it.

To quote Jermaine’s response to one of my questions:

I lived in Antigonish [Nova Scotia] for like the last 5 years, where I’ve been pulled over a million times

Despite being pulled over a lot while living in Nova Scotia, not once did Nova Scotia police  arrest Jermaine Parris for breaching the old Ontario juvenile warrant, although I’m sure they saw the very same information on their computers that Edmonton Police Services constables did. 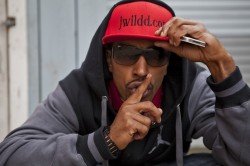 That said, J Wildd  works very hard at his music and is making a name for himself both across Canada and in the United States.  He’s the lone Canadian rapper featured on an American talent CD, something not done before.

Even if you, like me, aren’t a fan of rap music, I’d encourage you to visit his website, http://jwildd.com, and listen to a few of his tracks.  He’s posted a lot of them on the site and they’re good.  And I don’t even like rap.

In short, it appears J Wildd is on the right track with his life, despite this apparent harassment from the Edmonton Police Service.

In the past 2 months alone Jermaine says he Edmonton Police have pulled him over 8 times.   That doesn’t include the times he saw a police cruiser waiting for him and went the other way to avoid them. Tired of the endless attention of the Edmonton Police, he sold his car in mid-May since every time he drove anywhere, the police were all over him.

Now the outstanding juvenile warrant must be dealt with.  Innocent or not, that is out there and will continue to haunt him until it’s resolved.  It’s unclear whether he knew about this warrant before he moved to Alberta or not, but regardless, it’s there and isn’t going away.

So answer me this, should I be judged for who I am, or who I was? J Wildd…

The answer to that question is, whether we like it or not, we are judged on our actions, past and present.  The mass murderer who finds God in prison is not the killer he was, but he must still pay the price for his crimes, right?

While he’s no murderer (far from it!), the same principle applies to Jermaine Parris.

Despite the fact he is no longer a juvenile delinquent; that he’s changed his life for the better and, as he says, had nothing to do with the arson Ontario authorities charged him with, Jermaine Parris must still hold himself accountable and be responsible for his actions.

Yes, even if that means answering charges for an 11-year-old crime he didn’t commit.

I wish Jermaine all the best as he deals with this situation.

And if you’re into rap music, hey, even if you’re not, check out his music at  http://jwildd.com. You may be pleasantly surprised.  I know I was.