The Governor of Colorado was warned.  Pass anti-2nd Amendment legislation and Colorado firearm manufacturing business would leave, taking their jobs and taxes with them.

Governor Hickenlooper either didn’t care that multi-million dollar businesses were about to leave his state, or he was glad to see them go.  Either way, he’s an idiot.

Magpul Industries Inc. generates almost $100 million per year in sales.  They employ over 600 people. Colorado people.  That’s a big business with one heck of a lot of employees, all of whom pay taxes.

They won’t be paying those taxes to the State of Colorado for much longer. Doug Smith, the Chief Operating Officer for Magpul said,

“If we’re able to stay in Colorado and manufacture a product, but law-abiding citizens of the state were unable to purchase the product, customers around the state and the nation would boycott us for remaining here.  Staying here would hurt our business.”

If Colorado legislators want to outlaw his company’s products for Colorado citizens, then there’s no point in remaining.  It’s pretty simple economics from Doug Smith’s perspective.  Stay in a state that hates him and his company and lose business from customers outside the state, or find a new home.

HiViz Shooting Systems, a manufacturer of sights, recoil pads and other shooting accessories, will also leave the state, and for the same reason. Phillip Howe, president and CEO of HiViz said,

“I make this announcement with mixed emotions. Colorado is a beautiful state with great people, but we cannot in clear conscience support with our taxes a state that has proven through recent legislation a willingness to infringe upon the constitutional rights of our customer base.”

HiViz is leaving Colorado and most of its employees will move with it, company officials said, and their new home will be Laramie, Wyoming.

Both Texas and South Carolina are also actively wooing Colorado’s gun manufacturing businesses to set up in their states and for obvious reasons.

Using Magpul Industries as an example, 600 employees from a single company generate an enormous amount of tax revenue, not to mention the taxes Magpul itself would pay each year.

That means effective immediately four productions including their popular “Gun Stories” will move to another state.

Max Bayne, the executive producer and host of the Outdoor Channel, publicized an email he sent to State Senator Steve King about the decision.  It’s brilliant.

This morning I met with my three Producers, and we made the decision that if these anti-gun bills become law, we will be moving all of our production OUT of Colorado. We have already cancelled a scheduled filming session for late this month.

Obviously, part of this is due to our own commitment to the right to keep and bear arms, but it also reflects 3 lawyers’ opinions that these laws are so poorly drafted and so designed to trap otherwise legal citizens into a crime (one of our attorneys referred to them as “flypaper laws”) that it is simply too dangerous for us to film here.

I can give you chapter and verse on the legal implications if you need, but suffice to say that the first legal opinion was so scary we went out and got two others. All three attorneys agreed.

We are relatively small potatoes in television, but our relocation of production will cost Colorado a little less than a million dollars in 2013.

Secondly, we have proudly promoted Colorado in our productions (and have been moving more and more production into the state); now we will do exactly the opposite.

What does this mean for Colorado?

The community of television producers is a small one. Last week I had lunch with a major network producer who was looking to locate his new reality series in Colorado. That producer is also a shooter, and the new reality series will now be based out of Phoenix.

That lunch cost Colorado over a million [dollars] in economic impact.

Thirdly, according to numbers I received from the National Shooting Sports Foundation (for whom I used to work) yesterday, hunting had an almost $800,000,000 impact on Colorado in 2012, driving as many as 8330 jobs. Next month I will be in Texas meeting with most of the top outdoor/hunting producers, and the Number One agenda item will be Colorado. Already, hunting organizations and statewide hunting clubs around the country are pulling out of Colorado, and we expect this trend to accelerate rapidly.

The message we will take to our viewers and listeners is that these proposed laws are so dangerous to hunters and any other person, be she a fisherman or a skier who brings a handgun into the state for self-defense, that we cannot recommend hunting, fishing or visiting Colorado.

We reach millions of people, and, quite frankly, we have a credibility that Colorado government officials can no longer match. Colorado Division of Wildlife is already running ads trying to bring more out-of-state hunters to Colorado…in light of the flood of negative publicity about these proposed laws, I can assure you those ads will fail.

We estimate that as many as one-quarter to one-third of out-of-state hunters will desert Colorado in the next 18-24 months, which will quite frankly be a disaster for the hunting industry in Colorado and have a devastating effect on our western and northern communities (certainly like Grand Junction).

Senator King got the message.  He spoke against the bills saying,

“These radical bills demonstrate that penalizing law-abiding gun owners harms not only Colorado hunters, but it also damages the economy. If these bills pass, Colorado will become known as an unfriendly state toward sportsmen and will force other producers across the country to consider other states.”

While those words are not nearly as harsh as I would like to see, they do get the point across. 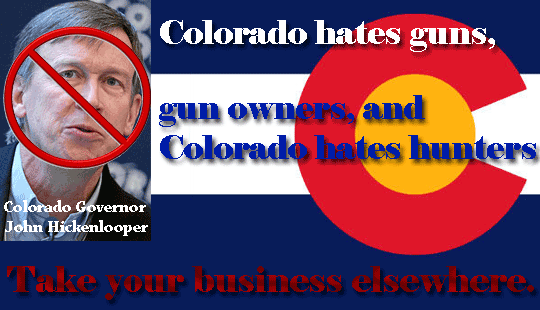