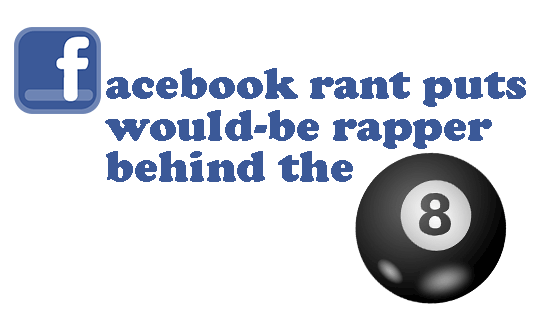 In our age of hyper self-absorption it’s easy for some to rationalize their way into the craziest (and stupidest) of actions.  Cameron D’Ambrosio, a young would-be rapper, discovered the high price of public stupidity after an offensive Facebook post garnered him not the fame he craved, but an arrest and terrorism charges instead.

Young Cameron though it was “cool” to make a rude and rambling comment on Facebook about committing an act even more horrific than the Boston Marathon bombings.  Sadly he thought the road to his fame and fortune drove through Stupidity, USA.

“I’m not in reality, So when u see me (expletive) go insane and make the news, the paper, and the (expletive) federal house of horror known as the white house, Don’t (expletive) cry or be worried because all YOU people (expletive) caused this (expletive),” read the social media posting that raised alarms with high school assistant Principal James Weymouth when another student called it to his attention.

“(Expletive) a boston bominb wait till u see the (expletive) I do, I’ma be famous rapping, and beat every murder charge that comes across me!”

“Cammy Dee,” the rapper name D’Ambrosio used when he made rude and crude YouTube videos, will likely now spend a long time in prison.  If he’s convicted of even a single count of making a bomb threat he could spend 20 years in prison.

It’s a sad and pathetic commentary on our society when a young man believes endless rants filled with threats and profanity pass for music, or that threatening, even in the context of a rude Facebook rant, is in any way amusing.

It appears that 18-year-old Cameron D’Ambrosio isn’t new to threats of violence.

Last year he threatened to murder his own sister by stabbing her to death and was arrested and charged as a result of that threat.  The charge in that case was dismissed last month for reasons unknown, but I’m sure some poor Assistant District Attorney regrets that decision in the wake of all this publicity.