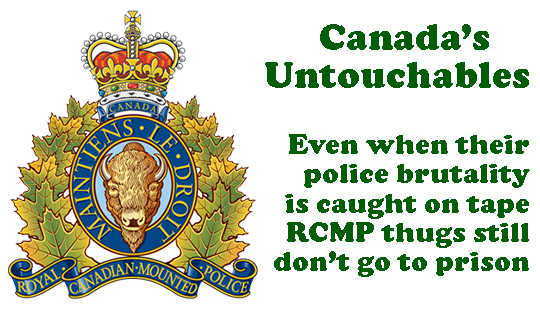 Like Benjamin (Monty) Robinson before him in his obstruction of justice trial for killing Orion Hutchinson, Canada’s justice system protects those who wear the venerable red serge, no matter how heinous their crimes.

Geoff Mantler’s sentence for brutally kicking Buddy Tavares in the face is a joke.  Eighteen months of probation?  About the only good thing I can say about this sentence is it beats the pathetic 30 days of house arrest handed to two-time killer Monty Robinson.

Thankfully Mantler’s entire heinous event was captured on video (as was Robinson’s first crime) otherwise the official RCMP version of “resisting arrest” would undoubtedly resulted in a conviction for Buddy Tavares.

That video, which went viral on YouTube, is the only reason the RCMP dropped their pretence as well as criminal charges against Tavares.

Judge Gregory Koturbash seemed, in the portions of his sentence published on Thursday, far more concerned about the perpetrator of the crime than the victim, something far too common when it’s a member of at a police force who committed the crime.

Buddy Tavares, like me, didn’t hold out any hope for a realistic sentence.  Sadly, he and I were right.

“He’s got a list of assaults longer than my arm, a long list and no convictions,” Tavares said to reporter Deborah Pfeiffer.

That made no impact on the judge, of course.  Koturbash stated the obvious first.

“The crime has had a devastating impact on Mr. Tavares, the kick to his head has set back his recovery from his brain injury and has also taken a toll on his mental well-being.  He has experienced panic attacks when the police are near and other symptoms consistent with post-traumatic stress disorder.”

He then went on to say this:

“Many who have watched this video will never comprehend how this could occur in a country like Canada. In the end I must not only have compassion for what Tavares has been through, but what Cst. Mantler has been through.”

What Constable Mantler has been through???

He’s the guy who perpetrated the crime.  Any adverse things he “has been through” are a direct result of his own criminal actions!

Yet we are to feel sorry for him?

For the record, the only reason it’s “former” RCMP consatble is because Geoff Mantler resigned.  The RCMP did NOT fire him.  Despite all the bad press and continued RCMP thuggery, RCMP brass are still unwilling to fire their bad apples.

Not only will Geoff Mantler not see the inside of a prison cell, he also will NOT receive the standard firearm prohibition that any “mere citizen” would automatically face were they convicted of a brutally kicking someone in the face.

I actually had to read the sentence twice in the news report because I couldn’t believe I’d read it correctly the first time.

Yup, there it was in black and white:

“I am suspending the passing of sentence and placing you on probation for a period of 18 months,”  Koturbash told Mantler, as he sat in a crowded Kelowna courtroom.

In addition, the accused was not prohibited from possessing firearms, despite the Crown asking for one.

If you’re not familiar with the concept, it’s what I call, with the greatest of disdain, the Police Sentencing Double-Standard and it is alive and well here in Canada.