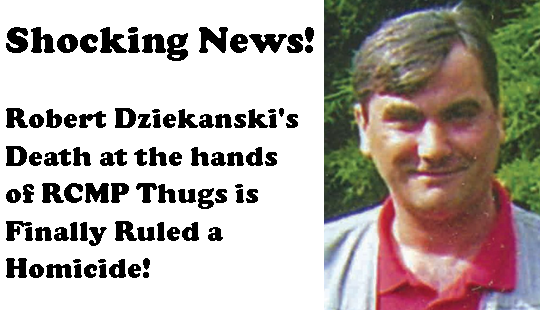 It only took the BC Coroners Service 5 years…

It’s rather astounding, I must admit, but the BC Coroners Service finally reached the blatantly obvious conclusion that Robert Dziekanski’s death was a homicide.

From the Toronto Sun:

They refused to state the men responsible for that homicide were 4 serving RCMP members, all of whom are awaiting trial on perjury charges for lying to the Braidwood inquiry.  Here is the conclusion of Patrick Culklinane, Coroner, who conducted this inquiry:

I find that Robe1i Dziekanski died in Richmond on October 14, 2007 of Cardiac Arrhythmia in the presence of a physical altercation and multiple deployments of a conducted energy weapon. I classify this death as homicide. Homicide is a death due to an injury intentionally inflicted by the action of another person. Homicide is a neutral term that does not imply fault or blame.

The circumstances of the death of Mr. Dziekanski and the use of conducted energy weapons were reviewed in comprehensive detail during the course of the Braidwood inquiry. Given the extent of the review and the accompanying recommendations, which have largely been adopted by the relevant agencies, I make no further recommendations.

The 4 RCMP thugs who murdered Robert Dziekanski were led by that posterboy for everything that’s wrong with the RCMP, Benjamin Monty Robinson. 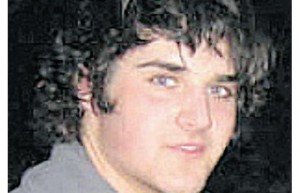 Over the years I’ve written extensively about this piece of garbage who went on to kill Orion Hutchinson while driving drunk less than a year after killing Dziekanski.

Adding insult to injury, the judge saw fit to sentence Robinson to a whopping 30 days of house arrest for obstruction of justice in the Hutchinson case.

Dziekanski’s death was extensively investigated by the Braidwood Inquiry. Its recommendations led to a significant drop in police Taser use starting in 2008 and the creation of the Independent Investigations Office — an agency that investigates deaths and serious injuries involving police.

The Mounties involved are currently facing perjury charges in relation to their testimony at the Braidwood Inquiry.

I suppose this ruling is better than nothing, if only that it says someone killed Robert Dziekanski.

You can download the BC Coroners Service Report into Robert Dziekansi’s homicide from this link: