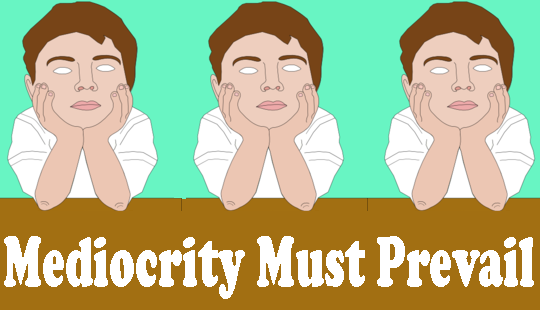 Everyone is a winner!

No child left behind!

You hurt my feelings!

You didn’t include me!

And so it goes… rewarding excellence is a crime against the mediocre and the lazy… a crime for which the excellent must be punished.  How dare they, after all, stand out from the crowd? 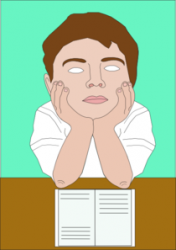 Have they no shame?

The questions are, of course, completely backward.  It’s the mediocre who ought to feel ashamed of themselves when they cry they’ve been excluded from award ceremonies for academic excellence.

If their feelings are hurt at that exclusion the solution is fully under their control.  Apply yourself, work hard and excel.  That’s what the honor students do.

Whiners complain and moan about how unfair life is.  Winners simply do what is in front of them to do, and to the best of their ability.

Whiners despise that, of course, as it means they must actually do something.

Morons are another topic entirely.

Morons believe the lowest common denominator is a quality to strive for.  Excellence, not so much.

Moron is the perfect description for Ipswich Middle School Principal David Fabrizio, who is leading the charge against those lazy whiners’ hurt feelings.  We ought to run David Fabrizio out of town or perhaps tar and feather him for his gross stupidity.

Honors Night is to reward and praise those students who toil into the night in search of excellence, a thought apparently foreign to Fabrizio.

“The Honors Night, which can be a great sense of pride for the recipients’ families, can also be devastating to a child who has worked extremely hard in a difficult class but who, despite growth, has not been able to maintain a high grade point average.”

That’s called Life.  Sheltering children from that reality doesn’t prepare them for the world, it turns them into victims.

Fabrizio also said he decided to make the change because academic success can be influenced by the amount of support a student receives at home and not all students receive the same level of emotional and academic support at home.

This is also called Life…

Hard as it is to believe, every family is different.  Many students excel because of supportive environments, others excel despite the opposite.  There is no “one size fits all” family, even though intellectual midgets like Principal David Fabrizio and French President Francois Hollande insist otherwise.

You may recall Francois Hollande wanted to ban homework in France to “be fair” to those he considered underprivileged. As I wrote in my article French President Francois Hollande says Homework is a Crime Against Humanity?

Take, for instance, Chief Moron and French President Francois Hollande. This dingbat is on a rampage to outlaw homework on the basis that it discriminates against the families of the “non-wealthy”.

Hard work and success are sins to be ashamed of?

Where do we find such vapid so-called “leaders”?

Why do we keep them on after they prove how idiotic they are?

Where is the public outrage at this institutionalized stupidity?

Good questions, all, and as Dave Jolly wrote,

He’s sending a clear message to students telling them it’s not worth the effort to be an honor student anymore.  Mediocrity is the rule and in Frabrizio’s eyes, everyone is the same, regardless if they are a straight A student or a complete failure.  Sounds to me that it’s time for the parents to go to the school district and demand a new principal.

To the parents of students at Ipswich Middle School I challenge you to demand the immediate removal of David Fabrizio and replace him with someone who understands we must reward excellence.