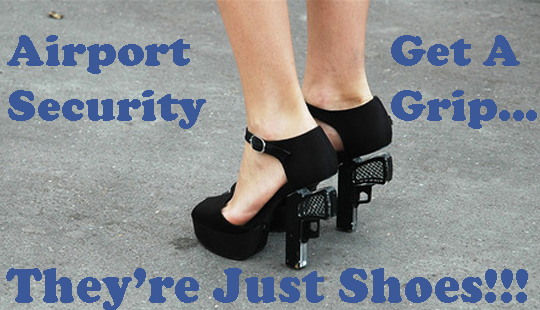 In the realm of human stupidity it’s hard to do worse than the intrepid fools who inhabit the ranks of airport security.  There common sense is verboten and the ability to think rationally… well, let’s just say it’s not welcome there either.

The latest entry into the stupidest airport security blunder ever this week goes to the Swiss… a prize that actually surprised me.  I would expect this sort of blatant stupidity from the ranks of America’s hated TSA but it seems the Swiss want a shot at the title, as it were.

British media personality (and former cocaine addict) Tara Palmer-Tomkinson was recently detained for several hours at a Swiss airport for, get this, a pair of shoes made by Chanel.

The heels of this particular pair of shoes looked like small pistols but there isn’t a functioning gun part anywhere to be found… unless you dare enter the hallways and corridors of the mindless airport security buffoons themselves who couldn’t figure that out.

Can you guess what happened next?

That’s right… while they eventually released Tara from custody and “allowed” her on her way…. her “killer shoes” are another story entirely.

You can’t really blame them… after all these are $1,500 Chanel shoes!

Why can’t we simply fire all the mindless bureaucrats who inhabit these agencies and replace them with human beings who can think?

The Rules Are More Important Than People

I’d best be a good little minion of the State and remember that next time I go near an airport!