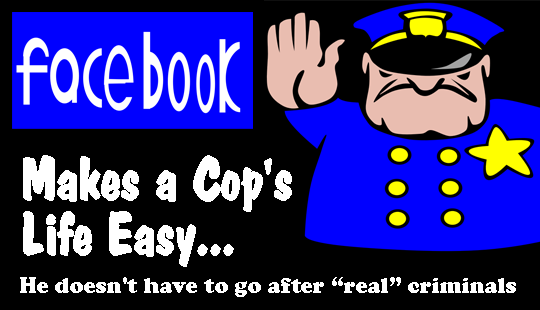 Everyone loves Facebook, but nobody loves Facebook more than governments and police agencies. It’s made their job so much easier.  And, should actual criminals be too hard to catch, a few hours trolling Facebook photos is sure to net dozens of possibilities.

New Jersey Police and the Department of Child and Family Services raided Mr. Moore’s home.  Why?

He posted a photo on Facebook of his son holding a rifle.

That’s not a crime, you say?

What’s that got to do with anything?  It’s not about crime, it’s about appearance.

So long as Minions of the State appear like they’re doing something they can claim success in the war on [name your agenda here].

While it matters not to the Minions of the State, let me point out for the record that Shawn Moore’s son has a hunting license and passed the state’s hunter safety training course.  The kid knows how to safely handle a firearm.

“If you look at the picture, his finger isn’t even on the trigger – which is proper. If half of Hollywood could follow that rule we’d be thankful.”

In the case of Shawn Moore and his family the Minions of the State had “no choice” but to investigate, and by investigate I mean a full-on jackbooted thug raid that culminated with threats to take away his children.

“The department has a child abuse hotline for the state of New Jersey and anybody can make a call to that hotline,” spokesperson Kristen Brown said. “We are required to follow up on every single allegation that comes into the central registry.”

Common sense does not apply.

However, knowing the State operates this way makes it very easy for anyone with an agenda to have the State do their bidding, which in this case meant terrorizing an upstanding family simply because they own firearms.

The family’s trouble started Saturday night when Moore received an urgent text message from his wife. The Carneys Point Police Dept. and the New Jersey Dept. of Children and Families had raided their home.

Moore immediately called Nappen and rushed home to find officers demanding to check his guns and his gun safe.

Instead, he handed his cell phone to one of the officers – so they could speak with Nappen.

“If you have a warrant, you’re coming in,” Evan Nappen, an attorney representing Shawn Moore, told the officers. “If you don’t, then you’re not. That’s what privacy is all about.”

With his attorney on speaker phone, Moore instructed the officers to leave his home.

“I was told I was being unreasonable and that I was acting suspicious because I wouldn’t open my safe,” Moore wrote on the Delaware Open Carry website. “They told me they were going to get a search warrant. I told them to go ahead.”

So, the next time you’re thinking of posting a photo to Facebook, make sure you’re not in the middle of some politically-incorrect act first.  It might just save you a SWAT Team raid and the heavy hand of the State all over your backside.

It is also useful to know your rights, as Shawn Moore did, so when the Minions of the State show up you can deal with them appropriately.

Once again and for the record, it’s not “unreasonable” to demand agents of the State produce a search warrant before ransacking your home.  It’s called a Constitutional Right.

Minions of the State hate those…