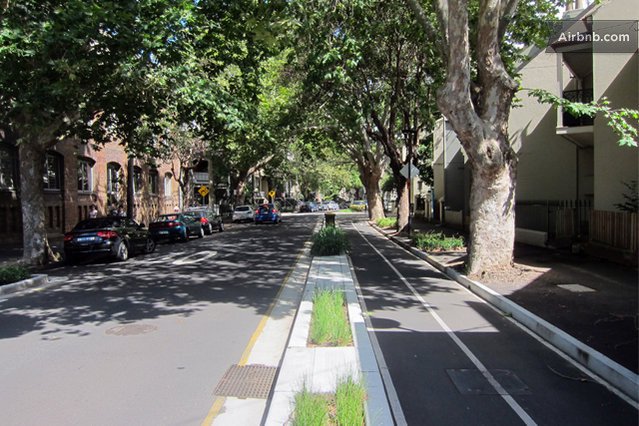 This is the fashionable Surry Hills/Redfern area of Sydney, Australia. It has well-established trees and, as you can see, an uprated street scape with protected bicycle lanes. This is actually VERY unusual; most cities spend little or no money on existing neighbourhoods because all their taxes and borrowing are used to build and service new subdivisions.

When was the last time you saw a paving machine on your street, or a concrete truck pouring a new sidewalk? I’ll tell you when; 1955.

Cities, provinces and countries in the West are continually chasing ‘growth’ and ‘expansion’ as if this were the only way they can create employment. In fact, as a new book points out (Enough is Enough: Building a Sustainable Economy by Dan O’Neill and Rob Dietz), growth for growth’s sake is what’s creating the enormous debt bubble that is sinking or will sink Greece, Cyprus, the EU and eventually and catastrophically, the United States.

Drew Nelles has a feature on the book in yesterday’s Globe & Mail in which he interviews O’Neill on his idea that countries should stop counting Gross Domestic Product (GDP) and start counting something weighted towards values, like a Genuine Progress Indicator (GPI). He blames fractional-reserve-banking for getting everyone into debt and suggests governments should stop letting the banks create money and reserve that right to themselves (full-reserve-banking).

At this point he goes off into a nutty, enviro-freak riff on the planet’s limited ability to sustain unlimited growth as if trees and water are the only losers when cities cover the countryside like an asphalt tsunami.

Let me pause for a minute and take a breath. About two years ago on my blog Mesopotamia West, I argued that Canada should adopt a policy of steady state development, not because we were running out of land but because with unlimited growth we can never catch up.

And why are we doing so? Because the government has an unlimited, open-door immigration policy!

If it just shut the door to the quarter million immigrants and quarter million seasonal workers, we could use our existing work force to fix our existing cities, homes, highways, parks and nuclear power stations. You can’t spend money on a new sidewalk for your old street if you’ve spent the same money on a new sidewalk on someone else’s new street. Simple.

O’Neil does get to this point, but he surrounds it with a pile of left-wing, progressive nonsense, so it’s hard to find. It’s here in this quote:

There’s a solution to all three of these problems, economist Dan O’Neill believes: the creation of a “steady-state economy,” in which material and energy use are kept within ecological limits, the population remains stable, wealth is distributed more fairly.

It’s point two in this list. Energy doesn’t need to be restricted and wealth distribution should be a matter of wealth creation not government fiat. But the second point is critical. If you can put a lid on the population you can solve the debt problem and the quality-of-life problem in one fell swoop.

More importantly, if you have a steady population, that population can discover, or re-discover its group identity. Canadians could find out what it’s like to be Canadian, rather than Caribbean or Mexican or Chinese. The Swiss could be Swiss. The Costa Ricans, Costa Rican and so on.

Culture can only be nurtured if is left to ferment on its own, separated from other cultures around the world. If we did that, we could solve the national debt, fix the national infrastructure and vastly improve the health and wealth of Canadians (and incidentally end most serious crime in Toronto, Edmonton and Vancouver).

It’s called a Steady State Economy, and at last someone is talking about it; even if they’re making terrible mistakes about why it’s necessary and how to implement it.