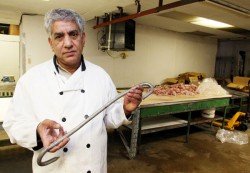 Sammy Sobieh released video that he claims shows members of the Edmonton Police Service merrily engaging in a round of police brutality.

“I need these guys to be punished as thugs, as any thug that assault somebody — because it wasn’t called for.”

Sobieh, a 60-year-old business owner, was arrested and charged with assault with a weapon, possession of a weapon and uttering threats after his beating at the hands of Edmonton’s Finest.

The video showing him at the time of his “incident”, as the Edmonton Police refer to it, shows he is not armed and is attempting to be compliant with the police constables’ demands.

As he turns his back they swarm him, take him to the ground and then beat him.

The video does not show Mr. Sobieh resisting in any way or showing any aggression toward the constables that could explain their sudden attack.   During the entire incident one constable has his weapon aimed at Mr. Sobieh.  The only sensible thing the video clearly shows is that the constable’s finger was NOT on the trigger.

Thank God for video cameras!  If it weren’t for the video of this “incident”, there wouldn’t even be an investigation into the actions of police.

It all started when Mr. Sobieh confronted a man behind his business who had assaulted one of his workers a few days earlier, according to the note at the top of the video posted to LiveLeak.com.

Apparently unhappy with being confronted by the business owner, the person called Edmonton Police and claimed he was threatened by Mr. Sobieh.

The president of the Edmonton Police Association, Sergeant Tony Simioni, said the video tells only one side of the story.

Such a typical response from police mouthpieces when their own are caught on tape acting like thugs.  The RCMP said basically the same thing when Constable Geoff Mantler was caught on video kicking Buddy Tavares in the face, if you recall.

Police Brutality Stock Answer #1: We don’t care if you have video, it wasn’t us!

Sgt. Timioni went on to say:

Well, once they had their suspect on the ground, I wasn’t able to see anything that showed a reason for pounding on Mr. Sobieh that the video shows with stark clarity.

He was not resisting.  He was handcuffed as far as I can tell before the beating started.

The Edmonton Journal report has Sgt. Timioni speculating about what happened even after admitting he hadn’t seen the video.

Naturally, police charge that Mr. Sobieh was “resisting arrest” and without actually putting it into these words, implied he got what he deserved.

“You don’t see a person resisting, necessarily. All you see is what appears to be some violent actions,” Simioni said. “And I can tell you from experience that sometimes, unfortunately, those violent actions are necessary for our own safety.”

I’m astounded once again that the very people sworn to uphold the law just can’t seem to tell the truth even when they are confronted with video evidence of their own misdeeds.

RCMP Constable Geoff Mantler claims to this day he did nothing wrong.

The three constables involved have not been named and the Blue Wall of Protection appears to be surrounding them.

That is, in a word, disgraceful.

The lone voice of reason actually appears to be coming from Edmonton’s top cop himself, Edmonton Police Chief Rod Knecht.  That’s rather interesting given his recent push to ban knives within Edmonton City Limits.  I would never have expected a sensible thought to come from him after that lunacy, but here it is:

I’m just grateful when it rears its head at all, and that it’s coming from the police chief actually gives me hope.

Yeah.  I actually said that.

Can hardly believe it myself.

Which one of these police takedowns in happening in a 3rd-world country?