The Globe and Mail newspaper, colloquially and ungraciously referred as the Mop and Pail, has an agenda and that agenda is NOT to report the news.  It’s to ensure a certain group of people are viewed favourably no matter how heinous their crimes.

The heinous murder of a 13-year-old Israeli girl Hallel Yaffa Ariel, stabbed to death in her sleep by a Muslim terrorist, shocked the world.  Instead of reporting that fact, however, with a headline that said “13-year-old Israeli girl stabbed to death by terrorist“, the News Sanitation Department at the Globe and Mail ran with this headline instead. 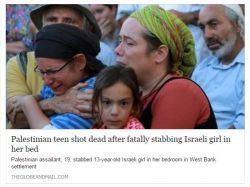 The focus of sympathy in that headline is not the murder victim but the degenerate terrorist who murdered the 13-year-old Israeli girl in cold blood.

It’s a problem when so-called news outlets decide they’re job is to manufacture the news instead of report it.

I do not fathom why the murderer is more important than the murder victim.  Then again the editors at the Globe and Mail aren’t the only ones playing fast and loose with the truth.  As I wrote earlier today in my commentary titled “Meet Hate-Spewing Radical Muslim Toronto Schoolteacher Nadia Shoufani“, even teachers in the Toronto area believe the “poor misunderstood boy” is more important than the little girl he murdered so viciously.

“Yesterday [July 1, 2016] the Israeli occupation forces shot dead, executed a 27 year old woman, a pregnant woman, killing her. That means killing two, two people, the woman and her baby. Her cousin Mohammad 17-year-old, was executed the day before.”

Shoufani leaves out WHY these two were killed because it doesn’t jive with her own personal narrative that anyone Muslim is in the right and everyone else is wrong.  As I wrote earlier,

The “why” changes absolutely everything.

Sarah Tarairah was killed while attempting to stab an Israeli policeman to death.  Her delightful cousin Mohammad Tarairah was killed by Israeli forces after he stabbed that 13-year-old Israeli girl to death while she slept; the girl I spoke of at the start of this commentary.

I won’t shed a tear for the deaths of either one.  They earned their deaths by their own stupid and inhumane actions.

I don’t know why reporting the facts is so hard for these people, but clearly far too many in the media are extremely mentally challenged in the truth-telling department.  So are many teachers if the repulsive example set by “Hate-Spewing Radical Muslim Toronto Schoolteacher Nadia Shoufani” is anything to go by.

In the wake of public disgust with their wordsmithing the truth-challenged scribes at the Mop and Pail did what all cowardly editors do when faced with mass revulsion.

They changed the headline.

The current headline for this story reads “Palestinian kills Israeli girl, 13, sleeping in her bedroom”.  Gone from the headline are the references to the murderer’s age and the killer was shot dead by authorities at the scene.

A Palestinian youth sneaked into a fortified Jewish settlement in the West Bank on Thursday, broke into a home and stabbed to death a 13-year-old Israeli-American girl as she slept in bed before frantic security guards arrived and killed him.

The girl, identified as Hallel Yaffa Ariel, became the youngest Israeli victim of a nine-month wave of violence that has seen dozens of Palestinian attacks.

The early-morning stabbing, carried out by a 17-year-old Palestinian high school dropout, was among the most brazen attacks so far, drawing angry accusations and calls from Israeli leaders for the world to condemn the incident.